faithful! The loyalty and betrayal of musical Interpretation

In the Osnabrück Lutherhaus and Kunsthalle on October 17-18, our music festival presents three concerts and three workshops that explore the creative relationship both between composer and interpreter as well as between space and the audience.

A communicative project, faithful! promotes active musical collaboration with school pupils by taking the aesthetic approach of using graphic scores that offer the young actors (under professional guidance) a playful, creative and interpretive first step into new musical forms and music of modernity.

Who is more important – The composer or the interpreter?

In the classical world – often referred to as “serious” music – the composer’s name is almost always the name most promoted. The interpreter’s performance often becomes less measured by its originality and individuality, and more by the extent to which the interpretation conforms with the supposed intentions of the composer. In other words, how loyal or faithful the interpreter remain to these. By contrast, pop music and many exotic music cultures place no value at all on this. The demand for “faithful” musical interpretations is purely a peculiarity of European classical music scene.

A “faithful” performance is considered the most perfect reproduction of the musical notation as possible, while taking into account contemporary performance practices. In attempting to remain as faithful as possible, today even copies of historical instruments are constructed. However, the notes found in the sheet music often only account for a small part of the overall concert experience or the musical performance in general.

For example, the using and performing of baroque embellishments already mostly go beyond the boundaries of the traditional notation. Moreover, within classical concert cadences or the graphic notations of contemporary composers, the composer even expressly wishes for the performer to expand the piece in his own individual way (i.e. through improvisation).

Many composers were themselves the most notable interpreters of their own works and took great liberties in their interpretations. The lack of digital reproductions back then, which we now take for granted, clearly ruled out any scientific comparison of the interpretation with the original score. Nowadays, though, musical interpretation faces a demand for faithfulness in numerous ever-new, differing ways:

Are the acoustics and atmosphere of the room, or the audience themselves not a part of the musical interpretation too?
And how can their “faithfulness” be guaranteed?
faithful! provides these theoretical questions with vibrant, creative answers by bringing them to life in unusual concert forms, from promenade concerts to DJ lounge music, from baroque to jazz. 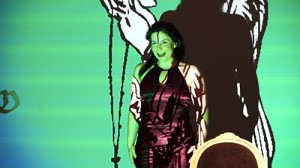 “The good (I am convinced, for once)
Is but the bad one leaves undone
Once your reputation’s done
You can live a life of fun”
Wilhelm Busch

The smart, playful and (sometimes) mischievously humorous Helen is of good standing and due to enter into holy matrimony. For financial reasons, the factory owner G.I.C. Schmöck – many years her elder – has been chosen for her, but she just can’t manage to break off her affair with her cousin Franz, to whom she’s been devoted for many years.

Wilhelm Busch (1832-1908) wrote this satirical comic strip in 1872 about double standards within the middle-class and church. Bernd Alois Zimmermann’s (1919-1970) version was created in 1957, originally as a play for West German radio. The composer, raised in the Catholic region of Eifel, supplemented Busch’s original text with his own humorous and rich in imagery music compositions to to produce a picaresque musical/literary work.

Like the comic strip, the radio play also displayed great artistry in its technical realization and conveyance (via repeated broadcasts) of such a unique combination of text and illustrations. Fortunately, the composer has allowed this radio play’s music and text to also be used for live performances. That provides faithful! with the chance to (re)interpret afresh this play, which has sat in the radio archives to this day, in a live dramatization. In this, the actress Vroni Kiefer lights a real verbal firework of recitation, readings and acted-out scenes.

Ensemble Megaphon reconfigures the usual sequence of the play and injects this retelling of the 140-year-old story and almost 60-year-old composition with a new, contemporary and humorous commentary through instrumental, electronic and visual means, completing the circle to Wilhelm Busch’s pictures with their own projections. 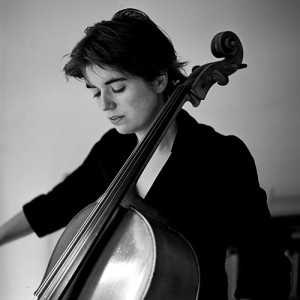 By no means are only the composer and the interpreter involved in musical interpretation.

When Richard Wagner expressly forbid the performing of his final stage piece at all venues until it could be performed at his own festival hall, he thereby exemplified how the venue can itself also be considered part of the piece and the interpretation. This is no less true for many Bach cantatas, which one rightly presumes were written by the musical director of Leipzig’s St. Thomas Choir not only specifically for the church’s choir, but also for the acoustics, atmosphere and architecture of the historical St. Thomas Church itself.

faithful! has quite consciously chosen to use Osnabrück’s Kunsthalle to communicate the clearly recognizable connection between the performance and interpretation of music and the acoustics, atmosphere and architecture of the venue in which it takes place. Built in the Middle Ages, the former Dominican church has been used as a chapel, a hospital, military barracks, exhibition venue and concert hall during its varied history; since 1991 it has been an art institution – further illustrating a creative new interpretation of an original purpose.

By using audio-visual choreography, the concert of the festival faithful! wants to bring art and architecture into contact with contemporary music and find the harmony there. Using alternating locations within the building, the concert will place special emphasis on certain works. As the listener can move freely around, their eyes and ears are free to discover the wide range of possibilities in understanding of the presented artistic works. 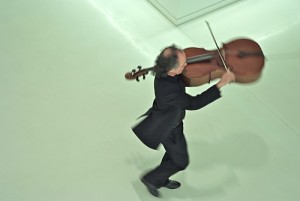 The German premiere of RAUMWANDEL by Willem Schulz is a collaboration between the festival faithful! and the Projektchor Osnabrück. In this unconventional cello concert, the choir plays the role of the orchestra. In both collective formations like groupings as well as in individual, subsidiary parts, the choir will form “sound spaces”, in which the soloist performs. The space and movement becomes musically and choreographically acted out. The spatial structures will mutate from a grated wall, via amorphous clouds, individual paths, peripheral points and dynamic clusters to an abstract architecture. The theme of RaumWandel is the relationship of the individual to the group around him.

The MusicSLAM in the Lutherhaus is at the heart of the improvisation and interpretation of New Music. Here, the same scores written by Anestis Logothetis are performed one after the other by a baroque ensemble and a jazz combo. In addition, the two ensembles will also interpret baroque and jazz pieces.

As an ensemble specializing in baroque music, Michaelis Consort is close to the historical approach to performance, in both the closeness to the traditional sheet music as well as its historical performance style. At the same time though, the works of Nicola Matteis and Georg Philip Telemann demand a great deal of improvisation, meaning plenty of individual creativity in the choosing and performing of numerous musical embellishments is possible and indeed required.

For The Faithful Jazz Workshop Band, spontaneous improvisation in performing their diverse array of jazz standards as well as their own compositions is naturally also a large part of their work.

A graphic score by the composer Anestis Logothetis (1921-1994) is the core of this unusual encounter. The Austrian composer with Greek heritage was perhaps one of the very first multimedia artists. Visual art, music, theater, literature – for Logothetis, everything was material from which he could create. And everything could be potentially ambiguous. “Polymorphy” was the name he gave to this principle.

Where we see the photo of a motorway junction, Logothetis saw sounds. Attempting to find new notes for these sounds, he became a pioneer of musical graphic notation: of a written presentation of music that uses none or only a few of the elements of traditional sheet music. Graphic notation is often an ambiguous, free-form type of notation, whose symbols and meanings are only explained in the footnotes or an accompanying sentence – and whose performance requires your own creativity.

From the same graphic notation, these two different ensembles will potentially create something very different on this evening – but whatever is heard, it promises to be unique and highly individual.

The Faithful Jazz Workshop Band
Students from the Institute of Musicology & Music Pedagogy at the University of Osnabrück, under the guidance of Joachim Raffel and Matthias Schuber

A lounge concert with a surprise
DJ Gagarino
a

Aimed especially at the younger crowd is the DJ-Lounge Concert by DJ Gagarino alias Jürgen Grözinger. DJ Gagarino is Jürgen Grözinger’s pseudonym in the DJ world – the name not entirely unintentionally recalling the astronaut Yuri Gagarin, the first man to enter the cosmos.

Gagarino’s DJ-Lounge concept stands for communication, for a transcendence and breaking down of the barriers between genres, categories and styles. He inserts the sounds of the preceding concert into his sets, creating connections between classical music and innovative electronic tunes:

“He covers different genres, times, aesthetic ideas and philosophies. He’s a specialist in extravagant mixtures. Grözinger wants to involve the young crowd in this and overcome the stiffness and distance of a concert setting”. (Rainer Schlenz, Deutschlandfunk)

The musicians from the preceding concert will join Gagarino.